By this point in your research on medical and scientific refrigeration, you have probably heard quite a bit about using glycol-encased probes for temperature monitoring. From the CDC’s recommendations on vaccine storage to Accucold’s own sales staff, most experts in the field of laboratory refrigeration strongly encourage using temperature probes with a thermal buffer (the most common substance being glycol). In order to demonstrate the importance of this type of probe setup, our Accucold laboratory staff conducted an experiment that compared the differences recorded in measuring temperature between a glycol-encased probe and standard probe exposed to air. This article includes a non-technical report from the experiment and provides some scientific explanations regarding the use of a glycol-encased probe over a normal probe for medical refrigerator monitoring.

Why is Temperature Monitoring Important?

In addition to maintaining the integrity of a vaccine, investing in reliable temperature monitoring devices will ultimately save your facility thousands of dollars . Temperature readings directly affect the decision whether to keep or throw away the contents of your refrigerator. Using malfunctioning or non-reliable monitoring products could lead to replacing viable vaccines due to inaccurate temperature readings that lead you to believe they are damaged.

Is Using a Probe Exposed to Air a Good Idea?

"Normal probes" mentioned in this article refer to all the temperature sensors that are not encased in glycol or other thermal buffers. Although these probes are perfect for measuring ambient temperature, they are less reliable when it comes to reflecting the actual temperature of medical products inside refrigerators. Due to their sensitivity in capturing air temperature, a slight change in air flow could result in a different temperature reading.

Air temperature could change quickly due to the rapid movement of molecules within air, but that does not mean the temperature of vaccines or any other contents in refrigerators would behave in the same way. Heat transfer laws indicate that an object will not instantly trade its temperature for the temperature of its surroundings. How fast the object obtains thermal equilibrium with the surroundings depends on many factors. Vaccines and other medical materials kept inside refrigerators have the ability to store heat energy and maintain low temperature. This ability prevents warm air from raising the temperature in a short amount of time.

When the refrigerator’s door is open or when the refrigerator is performing its defrosting cycle, hot air currents rush in and immediately alter the reading of the normal probe. During defrost cycles, the evaporator coil behind the refrigerator is heated up to a high enough temperature to melt any ice or frost that may form inside, but at the same time, not too high to diminish or ruin the potency of the vaccines. Due to the large amount of heat supplied during this process, air temperature is drastically higher than the actual temperature of vaccines. Sometimes, this perceived difference in temperature readings results in disposal of perfectly viable vaccines.

How Does a Thermal Buffer such as Glycol Provide More Accurate Readings?

According to the CDC guidelines for vaccine storage, a detachable probe in a bottle filled with a thermal buffer, such as glycol, more closely reflects vaccine temperatures. As indicated before, vaccine temperatures have been found to be more thermo-stable than air temperature which fluctuates with door openings/closings and defrost cycles. Suspending a probe in a sealed glycol bottle helps to prevent intermittent air currents from throwing the readings off and averages out the temperatures of the surroundings, consequently reflecting the actual temperature of vaccines inside refrigerators.

Glycol is often preferred over other thermal buffers because it has a low freezing temperature which allows more accurate temperature measurement in medical freezers. 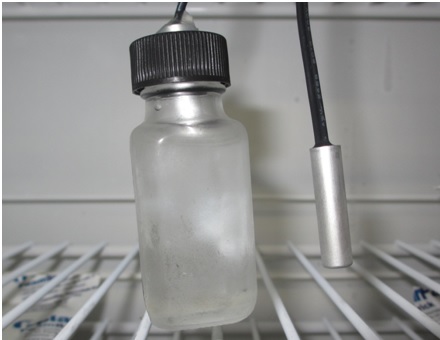 This experiment was divided into two parts. Part 1 included four medical refrigerators. To simulate frequent door opening of refrigerators at medical facilities, each refrigerator’s door was fully opened for 10 seconds at 15 minute intervals for the first four consecutive hours in each run. In addition, this part was carried out in a total of 12 runs with various amounts of loadings. Two gel packs were used as loads in the first four runs (counted as 5% loading), eight more gel packs were then added in the next four runs (increased to 25% loading), and finally 20 more gel packs were added in the last four runs (75% loading) (figure 3). The test was repeated four times for each loading to achieve consistency.

Four Accucold FF7L units were used; each one was modified so that they were slightly different from each other:

1A: Dial thermostat with cross-flow fan

1B: Dial thermostat without fan

Part 2 included an Accucold ACF48W, a frost-free vaccine storage freezer. The unit was loaded with 15 water bottles which were evenly distributed throughout the freezer. No door opening was involved in this part. Six runs were carried out in total this time. The duration of each run was increased from 18 hours up to 160 hours in order to have a thorough look at the temperature change during defrosting cycles.

For all units in both parts, two probes were set up for each unit: one was placed in a vial full of glycol with a small hole drilled at the top and one was not (figure 1). They were placed next to each other at the center for most accurate temperature readings. These probes were connected to two digital data loggers which were programmed to record one reading every 15 minutes (figure 2). The connected wires used were thin enough so that their impact on the interior temperature was negligible.

Figure 2: Probes were connected to two digital data loggers placed on top of the refrigerator 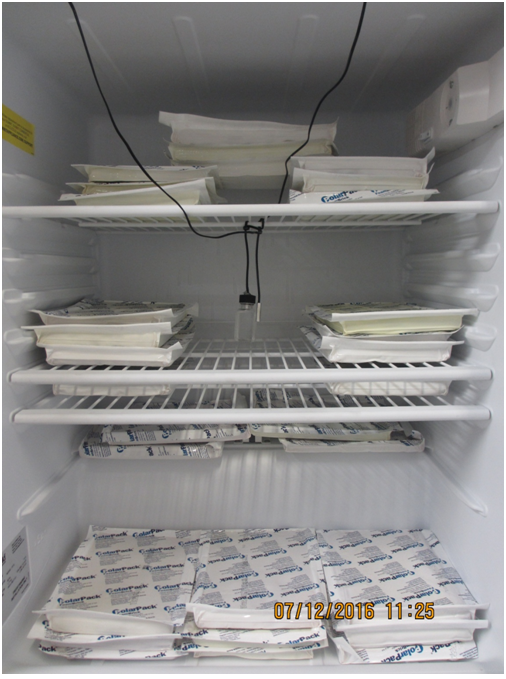 For the sake of simplicity, only one run for each loading is shown below. 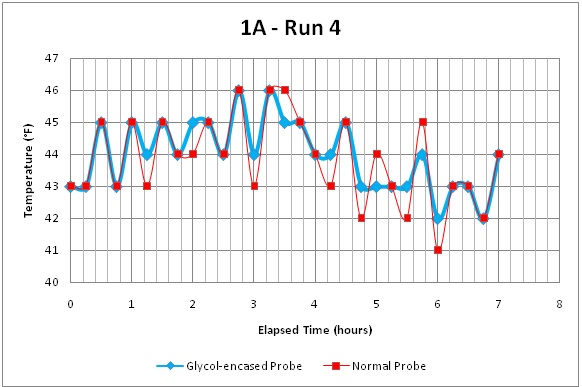 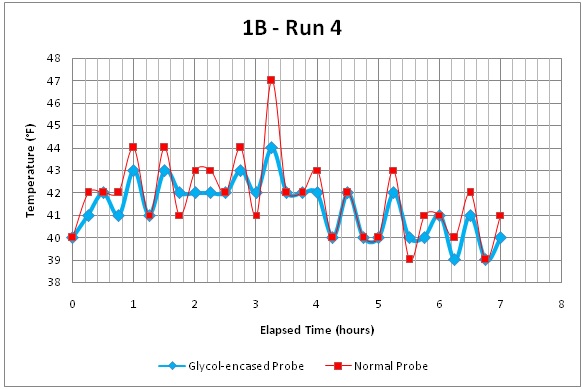 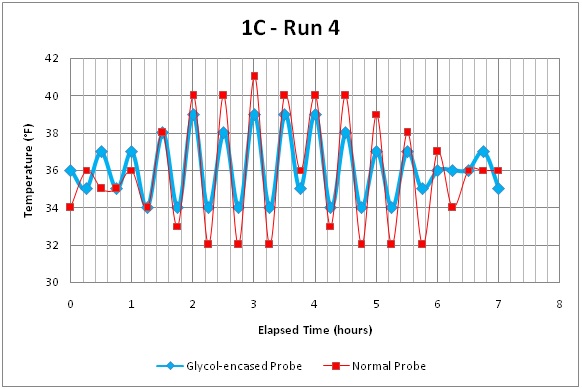 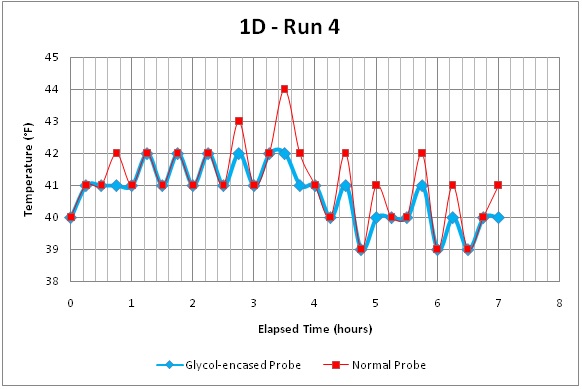 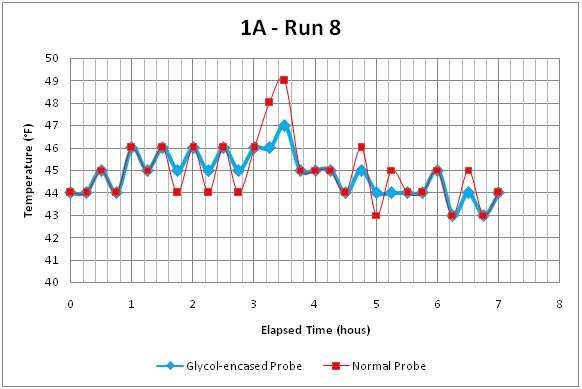 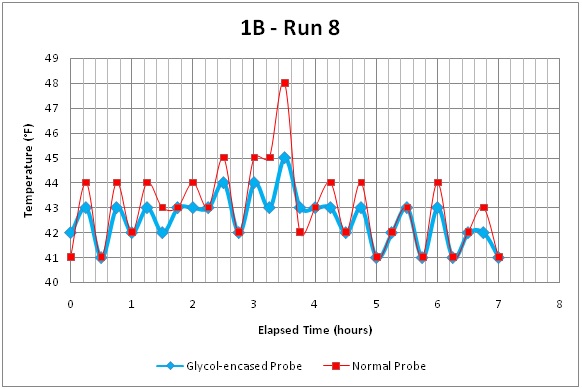 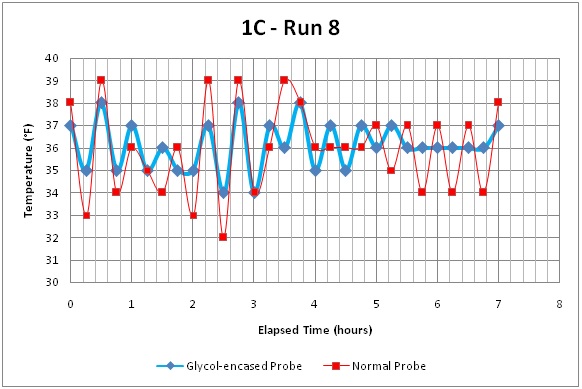 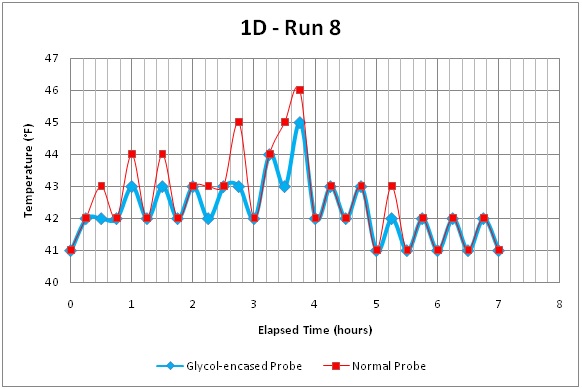 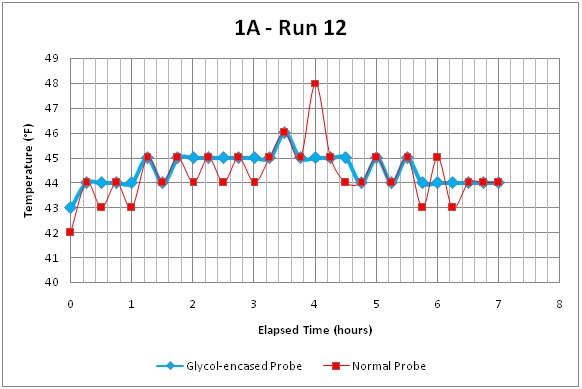 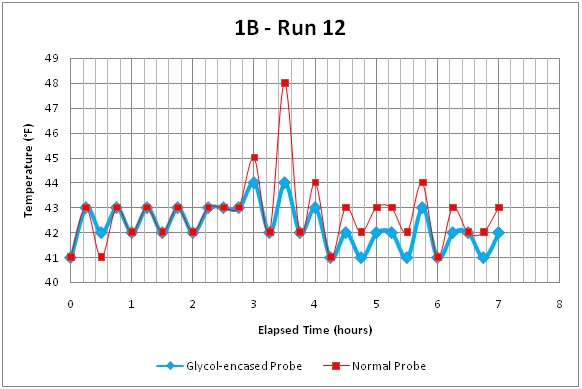 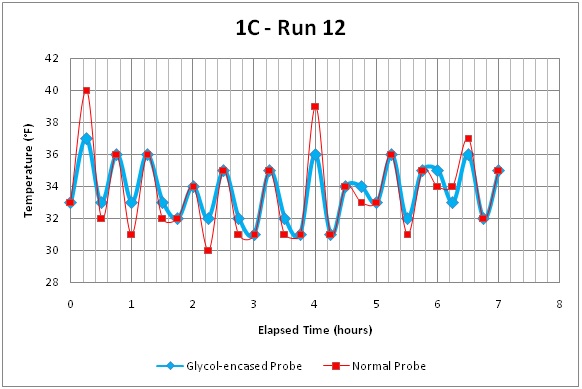 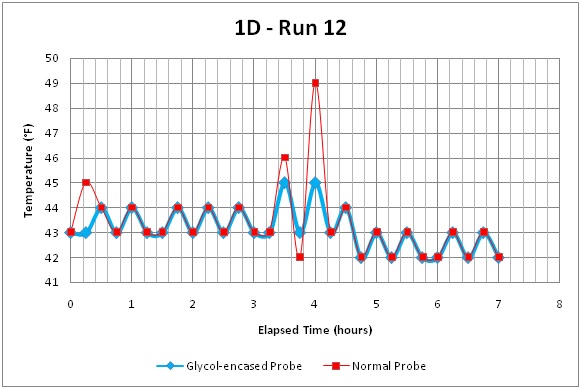 75% loading means the inside of the refrigerators is almost filled up. Three out of four refrigerators had their temperature go out of the safety range for vaccines according to the data collected with a normal probe. Similar to previous loading, temperature measurements from glycol-encased probes show slighter change in temperature and peaks at lower temperatures that are within the range. 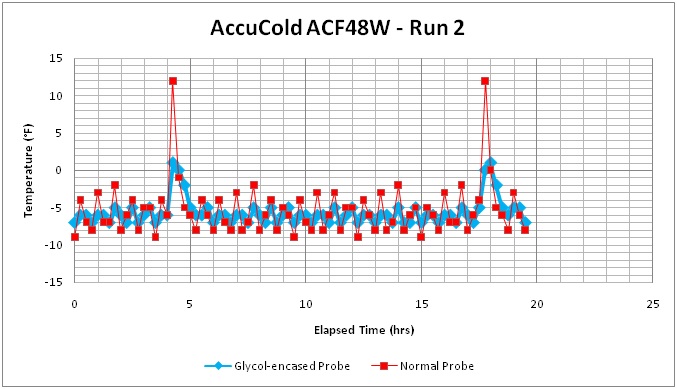 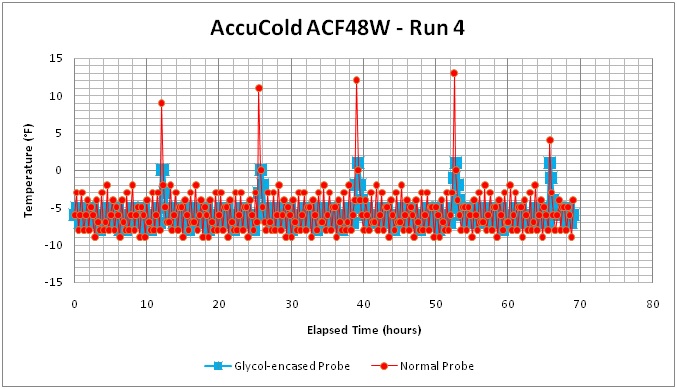 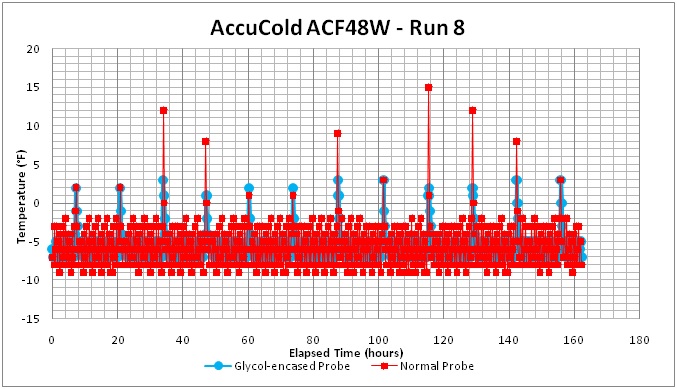